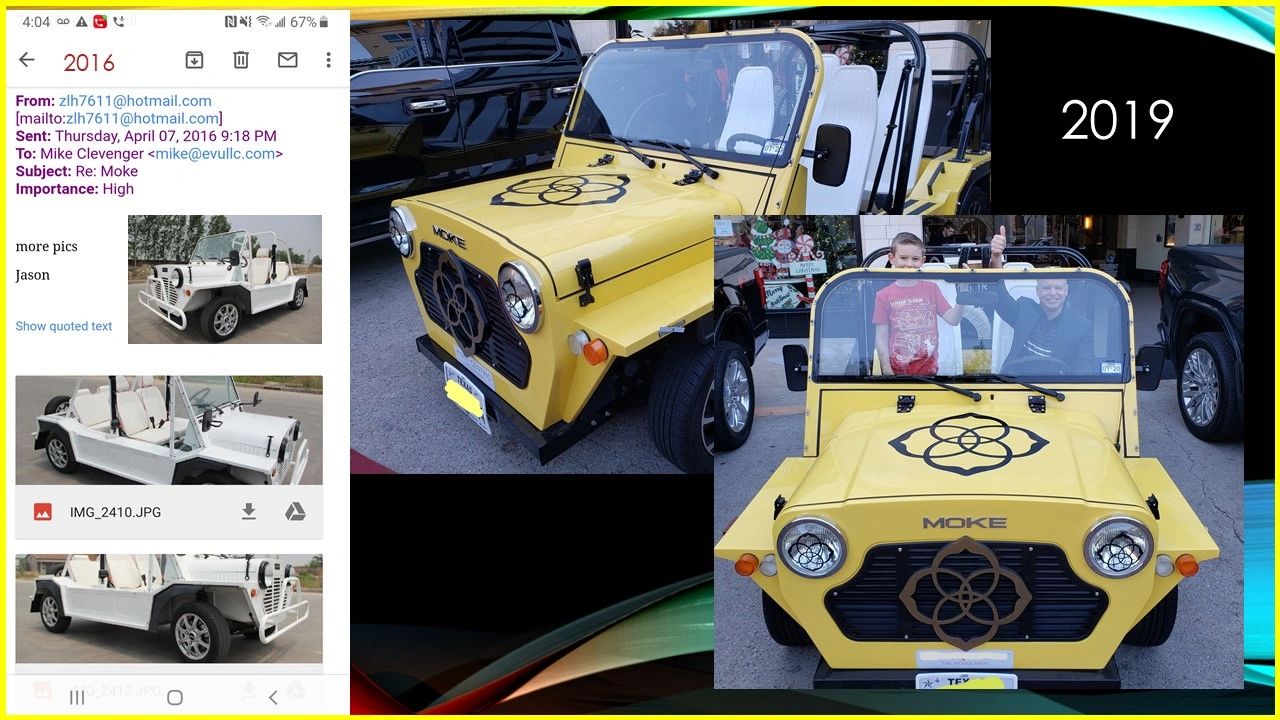 EXCITING to see a project started with Asian partners in 2016 as seen in the email, move to a hometown delivery, in The Woodlands TX!

Originally named NOSMOKE and homologated, the first car was made in China.

Honored to record this radio spot for HHC and Invest USA

Check out the industry vision and growth @ www.youtube.com/watch?v=MIv8TnwQFr4

What is in the name INDEPENDENCE? It is represents FREEDOM, LIBERATION and SUSTAINABILITY. These are the very principles behind the launch of Electric Vehicles Unlimited game changing FREEDOM CARRIAGE, called the INDEPENDENCE.

"There is no equivalent vehicle in the marketplace" states EVU founder Michael Clevenger, Vietnam Vet and DAV. The "INDY" is not simply an asset, but a life sustainability catalyst. EVU captures the essence of a lifestyle changing FREEDOM transportation asset, uniquely designed ergonomics and groundbreaking safety enhancements.

Patent pending technology includes: side impact protection, vehicle speeds programmed for a specific market or user, and the Independence rear entry method of boarding and exiting. There are no ramps. Interested?

The design enhancements are leading edge and designed to meet the exact needs of its user. " I have been involved with automotive technology, focused on the adaptability of previously unmet needs for persons of physical impairment for over twenty years, and this project checks all the boxes" says PJ Abbott, former Marine Officer, former IndyCar/NASCAR driver, and himself a military classified DAV.

Our patented, life changing technology will change the lives of millions around the globe. EVU has developed the first platform suitable for wheel chair use. This alone will offer INDEPENDENCE to millions, providing a platform NEVER seen previous to this technology. Add in our most recent partnership with one of the country’s most advance electronics firm and we can now offer Para/Quadriplegic citizens something never thought possible, the accomplishment of an actual private operator driver’s license, and FREEDOM! Our program and asset is appropriately called the “INDY” for Independence.

Most importantly in working with spinal cord injury individuals since 1999, is our awareness that although freedom may seem to be an exciting concept for us; it can be a fear for those who have been dependent for so many years. In addition to the technology and service platform, we have developed a mental health and adjustment program to accompany the fears and challenges of potential users. 2016 Business Performance and Behavioral Scientist of the year, and best selling author Dr. Hank Seitz, leads this effort.

Building on a reputation and referral, in July, 2016, GMES was contacted by the leadership of EVU, Electric Vehicles Unlimited first regarding the GMES Inflatable Barrier Control System use during flooding in the Dakotas.  Conversations evolved to the nano technology efforts of GMES related to EV energy cells, composites,  rubber, and it's reach into manufacturing, design, development, sales, marketing and distribution. A fee for estimated project initiation was quoted to EVU leadership. On August 16, 2016 GMES was approached and offered 150 shares of EVU stock, as one of nine (9) active shareholders in a closed member process, and additional deliverables registered in a signed MOU dated November 22, 2016 as posted below.  EVU/GMES Independence Project:  GMES informed of Patent issued December 2, 2016

First USA deliveries were originally scheduled for December 2016, then rescheduled and confirmed by a third party shipper for February 2017. February 2017 GMES is offered an additional 450 shares of EVU stock, and majority presence per 4a2 agreements documented with EVU attorneys. In August 2018 GMES, as a shareholder,  as seen in the document posted below, was informed by a senior partner of EVU that there had been an internal division of the company and a split of managing partners. GMES was informed via shareholder communique that current managing member Michael Clevenger has been removed by vote of the board of directors.  Mr. Clevenger had been the primary GMES contact as managing member of EVU and all associated negotiations. GMES was assured at this time, that inventory, scheduled for the previous February delivery would be fulfilled. Since the original notices, GMES received no deliveries of inventory,  was not updated on delivery progress, nor outstanding obligations owed to GMES of the posted MOU and an investigation was initiated. GMES delivered all commitments as listed in the original MOU. EVU and its BoD membership defaulted on inventory delivery and items per the original MOU.  Per communique on September 11, 2017, Mr. Clevenger informed GMES that he was the sole patent owner and had retained ownership of EVU.  Mr. Clevenger requested assistance in the areas listed int he original MOU.  EVU interactions have been placed on suspension; however, the development and technology gained has been widely used in other areas as well as automotive OEM and energy applications.

(English translation icon at bottom of the site pages)

MES has no current stake in Elbee Mobility and offers this referral objectively:

In 2009, work with SAP (super absorbent polymers) and certain single and multi-dimensional materials yielded the birth of the Inflatable Barrier Control System (IBCS).

Some refer to this process as the "sandless sandbag". The ability to offer a less intensive, less manual labor dependent, less resource required, lighter, faster and more protective inter-locking mechanism has the potential to save lives and property.

Offering  speed and agility, this technology answers the call.

Check out our Inflatable "sandless" barrier protection bags. They are not sand bags, but an Inflatable Barrier Containment System, replacing the entire need and hazards of the traditional sandbag:

This is a program originally launched in 2010-2013 and redesigned for diversified uses in 2016.

These have been qualified, tested and approved for use with FEMA and the American Red Cross Response Teams, and are available to you, as a consumer.

Thank you for the questions, and yes here are a few of the test drive videos:

Customers have questions, you have answers. Display the most frequently asked questions, so everybody benefits.

Very EXCITING to see first commercial delivery to hometown The Woodlands Texas, nearly four years to the date of the start of this project:   https://www.linkedin.com/company/33253398

This was one of the first commercial concept videos for the support of LEO protective equipment: BETA draft.