Spectators say this is "disruptive " we say "Transitional."

We must be scientifically literate

Captain Sully Sullenberger recently delivered one of the best speeches I have had the privilege of viewing.

In this short thirty seconds, he accurately identifies a critical shortcoming in today's society.

We salute and credit Captain Sullenberger for his identification of the need for fact and independent critical thought.

Our society must become scientifically literate to survive.

The impact and growth of two-dimensional materials (2D) during the COVID-19 crisis.

On behalf of EPG, we appreciate your participation as a speaker for the upcoming

Presentation Title: The Powerful Impact of 2D Materials in the Oil and Gas Applications

Graphene is an ultrathin carbonic particle made through proprietary manufacturing processes.

If you are seeking performance enhancements, light-weighting, or an array of additional targets, Graphene, often referred to as the "wonder material" may be an option. Our company is a pioneer & market leader in the design & qualification of graphene. We evaluate, test, distribute, market and sell.

The resources which now support the growing world of chemical and biomolecular engineering are no longer just for the gas, oil and petrochemical industry.

As technical teams are faced with smaller budgets and an increased demand for progress and development, 2D Global can assist you in understanding the current materials portfolios, match the correct materials for your project, offer resources in evaluation and performance data, and manage the appropriate marketing & sales connections for supply.

We have learned how used the thermally conductive properties to create an electrically " resistive " heat coating.  There are limitless opportunities for this technology, including the replacement of high maintenance heat tapes in harsh weather conditions and  use in the Wind Energy industry as acid rain and degradation protection and de-icing, thermal management.  We are working diligently to offer this technology in varied viscosity ratings as well as both solvent and water based technology. 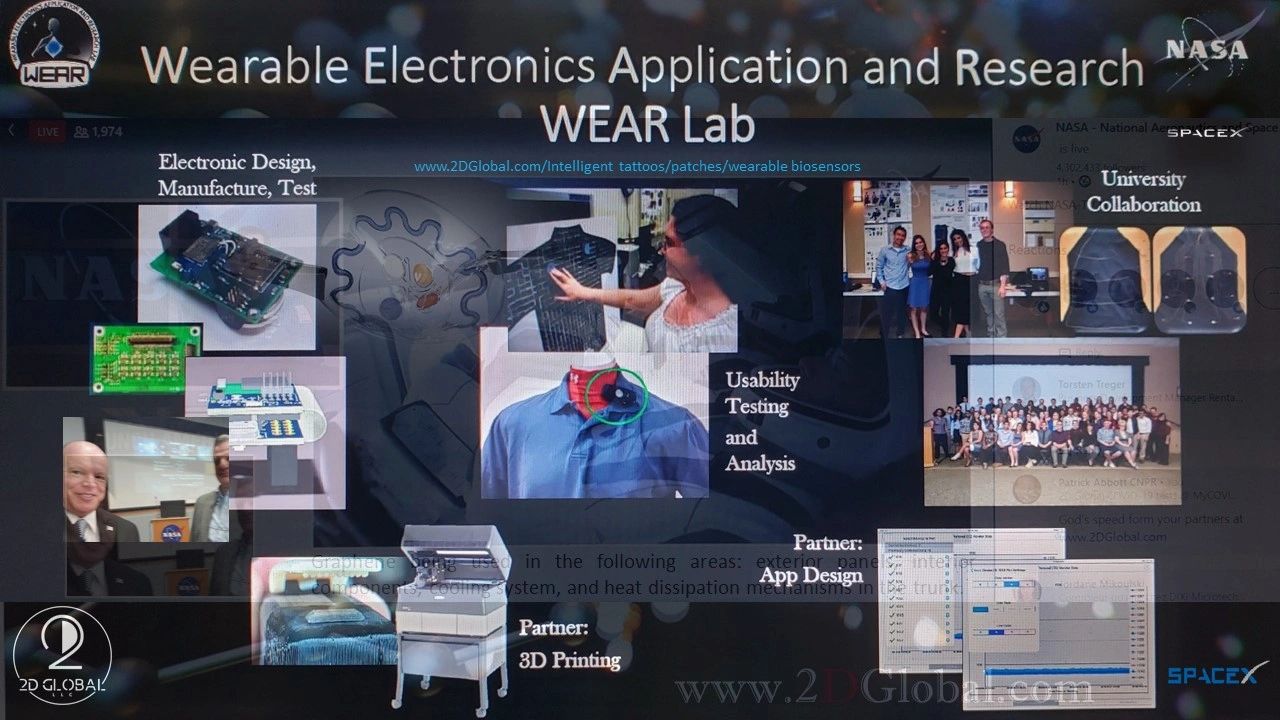 Efforts to research and develop intelligent tattoos, patches, and other wearable biosensors continue to advance and provide significant opportunities for improving personalized healthcare, and support of emerging civilian, military, institutional, and commercial projects.

Homes  & structures are now being printed with 3D tech and the use of 2 dimensional materials.

Graphene sensors can hear your BRain

Practical use in crisis times

In 2009, work with SAP (super absorbent polymers) and certain single and multi-dimensional materials yielded the birth of the Inflatable Barrier Control System (IBCS).

Some refer to this process as the "sandless sandbag". The ability to offer a less intensive, less manual labor dependent, less resource required, lighter, faster and more protective inter-locking mechanism has the potential to save lives and property.

Offering  speed and agility, this technology answers the call.

View the downloadable PDF version in the section at the bottom of this page.

The speed of innovation is raising the bar for quality and performance. We CONNECT science-based solutions that keep you on the cutting edge.

Our goal is to help our clients identify the target need, evaluate the potential options and match the correct technology for success.

We have limited the information on this site due to the sensitivity of these relationships.

We offer that unique bridge over the gap from academia to commercialization.  Our team can offer the client view from a 360* perspective. With nearly three decades of experience in polymers, additives, solvents, formulation, specialty chemicals, and the latest technology related to nano tech, 2D Global can offer an accurate evaluation of client requirements and solutions to meet those requirements.

Learning from the mistakes of the past. Offering system solutions.

Offering the client what they require: OPTIONS. The development of nano tech is in its infancy. Answering the questions that have yet to be asked.

2D materials are those that are made up entirely of their surface and are often only a single-atom thick. Not only are these new materials emerging at a relatively quick pace but they can be quite distinct. For example, the material can be highly flexible and porous as well as rigid and strong.

Graphene, a single-atom-thick hexagonal- or honeycomb-arranged sheet of carbon atoms, is considered the thinnest material known and stronger than steel. It is also pliable, transparent, and conductive of both heat and electricity. Commercialization efforts are already underway to make industrial-scale applications, including a conductive transparent electrode.

A one atom-thick layer of silicon, silicene has graphene’s electrical properties and could be used in silicon-based circuits to develop miniaturized electronic devices. Patrick Vogt of Berlin's Technical University, Germany, and Paola De Padova from the Istituto di Struttura della Materia in Italy isolated silicene through a process called simple vapor deposition to grow a one atom-thick silicon layer on a silver crystal surface.

David Muller and colleagues at the Kavli Institute at Cornell in New York discovered this thinnest preparation of glass ever made through electron microscopy. The silica glass though 2D is an amorphous structure that is a two-silicon-atom-thick and very stable and rigid, like bulk glass.

Silvery black and part of the family of layered metal chalcogenides, a MoS2 crystal, seen through optical microscopy and photoluminescence, consists of two molecular layers with part of one layer broken away. MoS2, being studied by Tony Heinz, PhD of the Departments of Physics and Electrical Engineering at Columbia University, considers MoS2to be a promising lubricant as it forms into loose layers that readily slide from one another.

Atomically flat boron, a naturally occurring mineral, is metallic and will transmit electrons with no resistance. Rice University’s Chair of Engineering and Professor of Materials Science and Chemistry, Boris Yakobson, PhD is studying the material and found it to be a natural low-temperature superconductor that loses resistivity only in very cold conditions - between 10 and 20 Kelvin or about minus 430 degrees Fahrenheit.

​A one-atom thick honeycomb layer of germanene atoms is buckled in nature, as seen through scanning tunneling microscopy. An international team of researchers led by Guy Le Lay at France’s Aix-Marseille University is exploring the material with the belief it could have a role in semiconductors.

Adding fluorine atoms to a single layer of tin makes stanene, a natural insulator that is believed to conduct electricity with 100% efficiency because the electricity moves along the outside edges of the material and not through its middle. Shoucheng Zhang, a physics professor at Stanford University’s Institute for Materials and Energy Sciences (SIMES) is a lead researcher for this material.

Single layers of black phosphorus, the most stable form of the element in open air, are being studied as a 2D electron-poor also known as p-type semiconductor by Peide Ye and others at Purdue University in Lafayette, IN.

Under raman spectroscopy instrumentation,  these materials will test equivalent to, or as an enhanced version of  any graphite based graphene material.  High resolution microscopic evaluations reveal single-atom-thick hexagonal- or honeycomb-arranged cubical atoms. The slight difference from a true platelet orientation offers the end use client unique formulation options. It is also pliable, strong, light weight and conductive of both heat and electricity.  This materials offers equivalent or better options in formulation design to graphene and is often referred to as "synthetic" graphene.  The enhanced properties are achieved through a patented bio-mass conversion and manufacturing process. The patented process allows for extreme purity, carbon negative material, high quality and consistency.  Commercialization efforts are already underway to make industrial-scale applications, with plants being promoted as available to supply more than 1000 MTs per month in order to fill the awaiting 2D materials pipeline.  Client benchmark and test evaluations of ProCene and ProC Nano in coatings, CRFP, construction, resins, epoxy, fluids, energy,  and many additional end use applications have displayed exceptional performance.  It will be interesting to witness the battle for classification, and real world applications testing of this "Graphene like" material.

Kortrax® has the same platform in the form of polyamide base as that of Quoral® with the addition of other polymers to improve the performance profile of chemical permeability and the oxygen transfer rate (OTR) of containers of HDPE. With the trademark of Baritainers®, Kortrax® made containers can safely transport solvent-based products such as cleaning solvents, household chemicals, wood preservatives, industrial chemicals, adhesives, agricultural chemicals and automotive additives.

Kortrax® BR is FDA, USP 661 and EU compliant. This new barrier resin can be used in food applications to prevent oxygen contamination and permeation. The food application may now be continued with barrier containers of Kortrax® with HDPE mono-layer.

In addition to this, Kortrax® BR has another feature of an optical tracer. Whenever Kortrax® BR is used, it is possible to identify its presence within the Baritainer® with the use of UV flashlight to confirm both the distribution and presence of Kortrax® BR that is embedded in the walls of HDPE matrix. This way, end-users can be assured of Kortrax® BR’ presence and its barrier protection to the liquid products that are packaged within the HDPE container walls.

New developments and updates will be posted in this section.

Working with our Military and First Responders. Since 2004 creating a safe, efficient and effective PEACEKEEPER.